How CRM Can Save You Money

How CRM Can Save You Money

Gary Cullen Gives an Interview to the Sunday Business Post 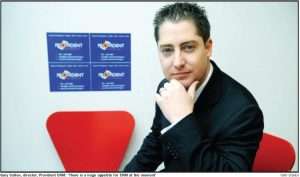 There is a huge appetite for CRM at the moment.

Most Customer Relationship Management (CRM) systems will do similar things, but this is not to say that all systems are the same. Take the example of SugarCRM, which is sold exclusively in Ireland by Provident CRM. It provides everything that businesses expect from CRM, including advanced sales management, support and marketing. So do many others. It exists in the cloud, thereby negating the requirement for expensive on-site infrastructure. It is not alone in doing this. But it costs a fraction of the price of most other CRM systems, and this is what makes it unique.

Provident was founded in 2000, initially as a telecoms consultancy. However, in 2004, it moved into software development and, according to director Gary Cullen, set about looking for something that would differentiate the company in the market.

"We started looking at alternative products, ones that were not already in the market. This led to us identifying commercial open-source technology, and we brought in four products, one of which was SugarCRM," said Cullen. "This was at the height of the boom in 2005 and 2006, and it's fair to say it was a hard sell in those days. But when the financial crisis took hold, people started to examine their costs, focused more on their sales processes and delivering value, and that's when things started to take off."

Indeed, Provident is now the second-largest reseller of SugarCRM in Britain and the exclusive partner in Ireland. It recorded 300 per cent growth last year with its entry into the British market, and itis targeting a further 50% growth for this year. Recent customer wins have included Quinn Insurance and Davy Stockbrokers.

However, the kicker for end-users is that, because it is based on open-source technology, it is significantly cheaper than non-open-source (propriety) alternatives; and the fact that it has been developed as a commercial product means that there are legal protections and high-end supports in place.

"There is a huge appetite for CRM at the moment, as companies that have survived the last couple of years are now looking at managing their sales, and planning for growth," Cullen said. "However, we believe that we have features which we have deployed better, for example, our interface looks good and is easy to use, we are more flexible and can run on-site or in the cloud. So we have everything that the others offer, but it's done in a more open and friendly way."

Another key factor for choosing the commercial open-source model is the fact that it doesn't use any proprietary languages. And while this might appear to be solely a consideration for techies, the reality is that it can lead to significant savings for companies who use commercial opensource.

"Most people involved with technology will be familiar with PHP, the language used by Sugar. So instead of hiring inexpensive consultants who operate in one propriety language, companies can use external or internal resources that are much cheaper," Cullen said.

Additionally, the fact that SugarCRMcanexist in a private or public cloud means costs are lowered even further. Of course, while the cloud was big news last year, Cullen believes that the next major trend for CRM will take advantage of. And he believes that companies who don't learn to incorporate 'social CRM' will be in danger of losing out on a major opportunity to engage with their clients.

"We are on the cusp of social CRM. Everyone is already using social media, from Gmail to Facebook and Twitter," Cullen said. "If a customer has a good or bad experience with a company, they have the ability to let the world know. So, all that businesses can do now is to try to treat every customer as well as possible and try to engage in the conversations as they happen.

It is about communicating and engaging with customers in a medium that they are already using, and the entire CRM market needs to figure out the best way to achieve this. It is very cutting-edge, but it is the future of CRM, and Sugar already has a number of different tools which allow users to check social media sites so they can see what's on their customers' minds before they even pick up the phone."